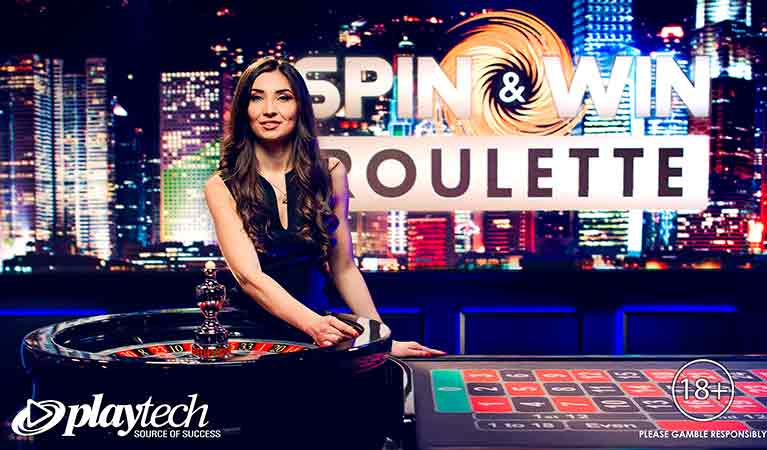 Renowned gaming technology provider Playtech has recently extended its partnership with The Stars Group’s PokerStars brand. The new agreement between the two companies has led to the launch of a new exclusive game title that will certainly appeal to live dealer casino game enthusiasts.

Spin & Win Roulette, the new live roulette game is an exclusive title that is multiplier-based which means that the users can look forward to some exciting action. The players will have chances to land a multiplier of up to 100x while playing the game.

While it is a multiplier-based variant of roulette like many others, it is unique since the developers have made some changes to make it even more exciting. Most notably, the players will be happy to know that every single straight-up position on the layout of this game is multiplied whenever a player lands a multiplier.

Besides the multiplier, the Spin & Win Roulette game also showcases the latest achievements in augmented reality (AR) technology. The game uses this AR technology to make the experience not only visually engaging but also more realistic-feeling than ever before.

The goal that the companies had with the game was to deliver exciting gameplay as well as great win potential which is, without a doubt, what every gamer will be looking for. All of these features are therefore set to make the game very popular especially considering the fact that online gambling has grown very popular over the past few months.

But, as it turns out, this is just the beginning.

More Exclusive Games in The Works

The relationship between PokerStars and Playtech has blossomed with the duo launching a wide range of games for both mobile and desktop users. These Playtech titles are very popular among gamers and now PokerStars customers can easily find them.

Things are going to get even better for PokerStars customers as they will be able to play even more exclusive casino games in addition to the recently launched Spin & Win Roulette.

“We’ve been working closely with PokerStars to build their exclusive offering, including a series of new dedicated Blackjack tables, and Spin & Win Roulette is a key step in our ongoing partnership. 2019 was Playtech’s busiest ever year for new Live Casino releases, and we’re delighted to be continuing that trend this year.”

Hopefully, more of these titles will launch in the course of the year in order to cater to the growing demand for live and online casino games. All in all, it is a great development that is bound to spur even more growth and competition in the industry. In the end, it is the customers who will win since they will have an even wider variety of platforms and games to choose from.