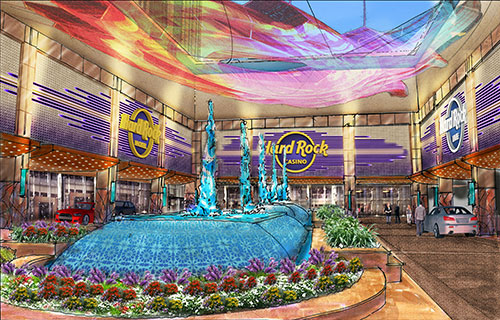 The shuttered Trump Taj Mahal casino, built and owned by the President of the United States, will soon have its presence and influence – most of which did nothing more than tarnish the once-bustling tourist hub famous for its gambling scene – completely erased from Atlantic City as new owners Hard Rock International puts up their very first billboard on the site to announce a targeted opening date for summer of 2018.

End of the Taj Mahal

Formally dubbed by the now-President as the “eighth wonder of the world”, the $1.2 billion casino was sold for 4 cents on the dollar for $50 million to HRI by billionaire Carl Icahn in March of this year.

Hard Rock CEO James Allen initially planned to spend $375 million on a complete renovation of the property and open the doors to guests during 2018 Memorial Day weekend on May 28th.  However, as demolition progressed, that figure was updated to $500 million to reflect on the work needed to rid it of its Indian-themed décor.

One the new casino resort is erected, there will be no resemblance of Taj Mahal left in the city.

The new casino will span 21,000-square-foot and feature two separate entertainment arenas with a 7,000+ seating capacity, a total of 2,400 slots and 130 table games throughout the gaming floors, and it will also boast of a completely redesigned interior to house first-class food and beverage concepts lead by Council Oak Steak & Seafood.

In addition to the fantastic shows and endless gambling opportunities, the Hotel and Casino will also feature brand exclusive offerings like full-service Rock Spa and The Sound of Your Stay music amenity program, making this place a go-to entertainment hot-spot for live shows, live music, gambling, sporting events, and with gourmet food and beverages to boot.

“From world-renowned music events to innovative dining concepts, we’re excited to bring the Hard Rock Hotel and Casino experience to the Atlantic City boardwalk – which has been home to our Hard Rock Cafe for more than 20 years,” said Jim Allen, chairman of Hard Rock International. “Our commitment to Atlantic City has never been stronger and we look forward to being a catalyst for further growth and development of the area.” – Hardrock.com

On top of bring Atlantic City to its former glory, Morris believes that as much as 3,000 permanent job openings will be created once the new casino is opened, as well as 1000 jobs during the demolition and construction phases.

Once opened, Hard Rock Hotel & Casino will bring Atlantic City’s land-based casino count back up to 8, and will help to strengthen its position as the country’s second biggest gaming market.