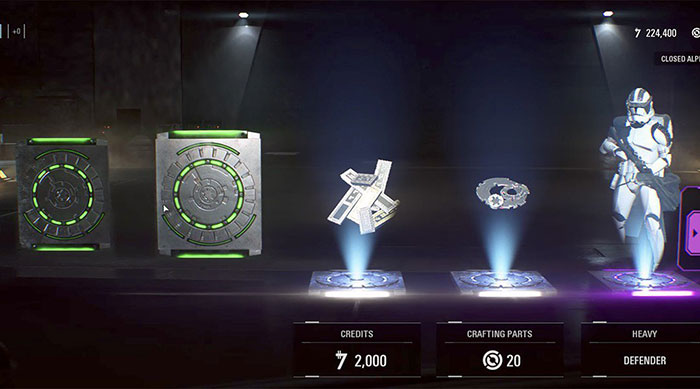 Every video game player has encountered loot boxes – maybe every once in while or regularly depending on the game you are playing. If you are not familiar with the term, then loot boxes refer to the containers that often pop up in video games offering random items and prizes for players to win. Winning or losing is random – familiar, right? But does this make it gambling? The concept of loot boxes has long eluded many people with varying opinions from different areas but there is something that they can all agree on; they are unregulated and are marketed to a large audience base that ranges from minors to adults.

The increasingly murky waters of loot boxes have gained a significant amount of attention from gamers worldwide as well as regulatory bodies such as the UK Gambling Commission, Liquor Regulation and the Victorian Commission for Gambling. The conversation was seemingly set off by the launch of the pre-release version of EA’s highly anticipated Star Wars Battlefront II earlier last month. However, the game was not received with a lot of enthusiasm especially by the customers who played the pre-release version – they cited the fact that players needed to collect thousands of credits which would amount to several days of solid gameplay before they could unlock certain game characters. While credits could only be earned in the game and not be bought, the game allowed players to advance faster by winning items through loot boxes which could only be used after they purchased ‘crystals’ using real money.

Loot boxes have been around way before Star Wars Battlefront II but the game did indeed open up much-needed conversations about loot boxes and microtransactions in video games. There is a large number of people calling for loot boxes to be banned and this includes Chris Lee, a Hawaiian Senator who was very particular about his opinions about Star Wars Battlefront II. In his words, the game is a “Star Wars-themed online casino, designed to lure kids into spending money.”

Other than just bringing the issue of in-game purchases that have long plagued video games across all popular platforms forward, the issue has further sparked debates about whether loot boxes should be officially classified as gambling. According to Dr. Daniel King, it is complicated.

“The word gambling is a constraining word. We might need some other term that recognizes an activity that looks and feels and has all the same mechanics of gambling but doesn’t have the same financial return. I think game developers are certainly learning from poker machines. But at the same time, I think games are much more sophisticated than poker machines. They have access to a lot more information about the player, they’ve got access to who the player is, their social interactions, their data, and habits. Poker machines don’t learn from what the player is doing, gaming does.”

Meanwhile, loot boxes and related in-game reward schemes are being investigated by Belgian gambling regulators. At the same time, the UK Gambling Commission recently released a blog post that detailed its position on whether or not loot boxes can be classified as gambling. Contrary to recent opinions from Australia and Europe, UK Gambling Commission’s executive director, Tim Miller stated that loot boxes do not qualify as gambling and thus cannot be regulated by the commission.