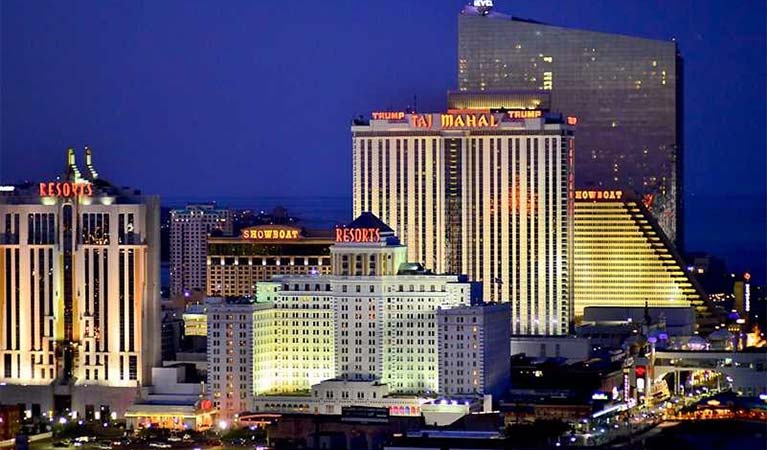 Atlantic City is set to see its renaissance in 2018 according to gambling operators. The threats that have plagued the financially stranded city’s entire existence are slowly fading and soon it will regain its once great reputation as an outstanding gaming hub.

First, Atlantic City’s reemergence will see the last traces of President Trump’s former casino empire finally get blown to the wind when the former Trump Taj Mahal is reopened as the Hard Rock Hotel and Casino Atlantic City. The Taj Mahal was purchased last year by Hard Rock International from renowned billionaire investor Carl Icahn for $50 million – this was inclusive of over 30 acres of land surrounding the property which was previously valued at $86 million. An additional $400 million has been pumped into the renovation project ahead of its launch date and the Hard Rock chairman, Jim Allen, is promising that the final offering will be a brand new and significantly improved integrated resort.

The company intends for the new establishment to feature 24/7 entertainment and non-stop music. Allen has recruited “Sopranos” actor and guitar whiz Steven Van Zandt as an adviser on ventures that could include small indoor performances, big concerts as well as beach concerts.
The Trump Taj Mahal was shut down in late 2016 following a bitter strike involving the city’s main casino workers’ union – at the time, it was still under the care of Carl Icahn. The investor’s next move is going to involve partaking in the disposition of the remaining traces of Donald Trump’s Atlantic City legacy. He intends to tear down the former Trump Plaza casino in order to make way for a yet to be named economic development project.

Hard Rock aside, Colorado developer Bruce Deifik recently announced his interest in buying the former Revel casino even though the property’s current owner, Glenn Straub, is yet to confirm a deal pertaining to the sale. Deifik and his group offered $200 million for the property and plan to invest $175 million more into it. Glenn Straub, on other hand, insists that he has not made any deal to sell it and he is, in fact, waiting for a state appeals court ruling on whether he needs a license or not to reopen the casino. Revel has not been operational since 2014 when it was shut down after just a little over two years of active operation.

Mark Giannantonio, Resorts Casino Hotel president, is optimistic that both the Revel casino and the Hard Rock and Casino Atlantic City will attract more customers to the city thus growing its market while at the same time circumventing casino cannibalization in the long term.