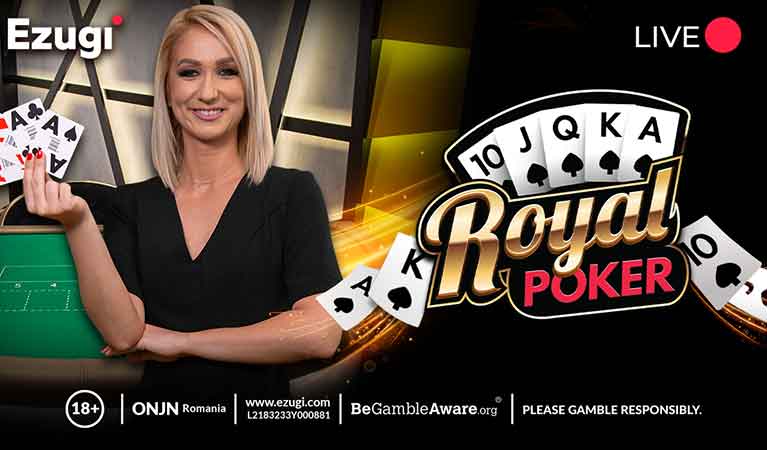 This past week, Ezugi announced that their new live poker offering, Royal Poker, is now available. Ezugi has expanded into new areas since joining the Evolution Group in 2018, and it has gained a reputation for being a risk-taking and innovative service provider during that time.

When compared to traditional Poker, Ezugi’s new game adds several innovative features and regulations. This marks the company’s transition into the next stage of development which is very enticing, to say the least.

In Royal Poker, you compete against the dealer utilizing the same hand-ranking and comparing rules as in regular Poker. The object of the game is to create a Poker combination that is stronger than the five-card hand that the dealer is holding by using the cards that you have been dealt.

During this game, players have several opportunities to make choices that would favor them. These include options to swap cards for a better hand, purchase an additional sixth card, purchase an extra card for the dealer to assist the dealer qualify, or take out insurance for a good hand. As a result of these decision-making possibilities, the game is very popular in markets located in Eastern and Central Europe.

A qualifying dealer hand must include an Ace and a King. If a player has a good hand, they have the option of purchasing an extra card to assist the dealer in meeting the qualification requirements. Players have the opportunity to even produce a double Poker Combination if their second combination includes at least one card that was not included in their original combination.

Increasing Popularity Across the Globe

Pang Goh, Ezugi’s director of business development, has commented on the new product, saying that although the new Royal Poker game has its origins in Eastern Europe, its popularity is growing rapidly worldwide.

The company’s goal with Royal Poker was to provide a live casino game based on poker hands in which players would face off against the house. As a result, the game becomes more exciting, luring players to try a fresh take on a classic casino game. There is an extra degree of difficulty and sophistication introduced by the complex decisions players must make throughout the game. To that end, we think players will like the game’s refreshing take on the genre and welcome the new challenges presented by these innovations.