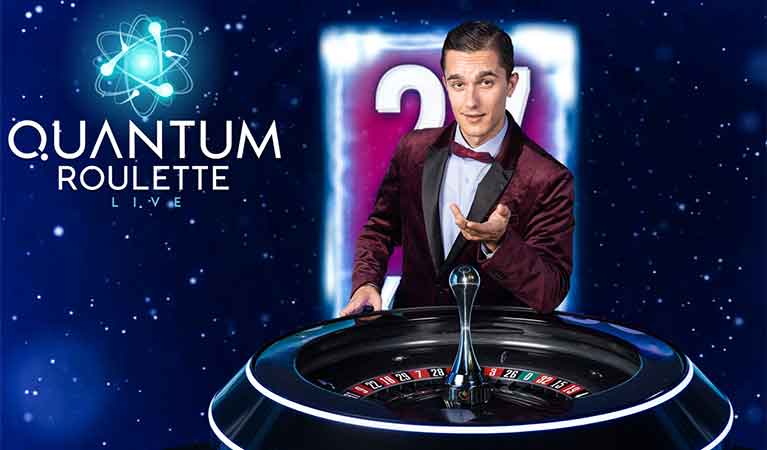 Playtech, one of the world’s leading casino and gambling technology providers, has recently announced the addition of a new roulette game to its live casino offering. Quantum Roulette, the new live roulette game has already been added across the company’s Live Casino network and can be found on the provider’s massive live roulette games collection.

Based in a high-detail immersive studio, the new game is part of Playtech’s plans to enrich the game selection and the gaming experience of its customers through amazing visuals, sound as well as dealer presentation. The result is a highly immersive gaming atmosphere that every online bettor will enjoy coming back to.

Quantum Roulette’s rules are based around Singe Zero Roulette and it further adds on to this by featuring multipliers on certain “Straight Up” positions during every game round. There are up to five multipliers ranging from 50 times to 500 times the player’s stake.

In addition to that, the new roulette title also features a special event that occurs at random and has the potential to enhance the aforementioned multipliers even further. This feature is known as Quantum Boost and it is designed to add more value to players by increasing some or even all of the multipliers even further. As mentioned earlier, Quantum Roulette is already available across the Playtech Live Casino network and is fully integrated into the provider’s Engagement Centre.

“Playtech Live’s focus on an experience-led offering, both from a gameplay and presentation perspective, is central to what makes us stand out in the industry,” Kevin Kilminster the head of innovation for live casino at Playtech said.

The launch of Quantum Roulette follows the launch of two other Playtech roulette titles earlier this year. These two games were included an American Roulette title and a Spread Roulette. Roulette aside, players will also be happy to know that the selection of Playtech games including even more additions including Hi-Lo title, Dragon Jackpot Baccarat, and Casino Stud Poker.

Playtech also announced that it has plans to release a whole line of native-first products to its portfolio, a development that is definitely great news for iOS users. Apple has recently updated the App Store guidelines that relate to publishing gaming and betting apps – the gaming operators are no longer allowed to repackage their websites via HTML5 technologies and upload these on the App Store. Going forward, the apps published on the App Store should include native functionality.

Playtech has promised to follow through with the launch of a number of great native gambling apps. iOS users, therefore, have quite a lot to look forward to and so do users of other device platforms.